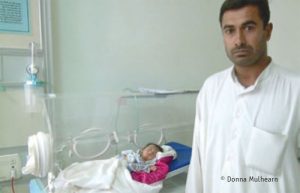 Uranium weapons are not classified as nuclear weapons, but are classified as conventional weapons. They consist mainly of depleted uranium (DU), a radioactive and chemically toxic heavy metal whose density is 1.7 times greater than that of lead. DU is a by-product of enriching uranium for nuclear fuel and weapons. Due to the high density of uranium, it has the property of being able to be processed as an armor piercing projectile. Therefore, the toxic metal finds use in the military and the development of new weapon systems.

The US, UK, Russia, China, France and Pakistan produce uranium weapons. 14 other states are known to at least store uranium weapons. As far as known, these weapons have been used only by two states so far: the US and Britain. Large quantities of DU were fired in Iraq and the Balkans. When DU bullets hit an armored surface, they are burned by the high temperatures generated by the impact. This creates a very fine dust that is radioactive and chemically toxic. Through food and respiration, this toxic dust is absorbed by the body. In the body, the radiation and the chemical poison cause serious damage. Many diseases can be caused: alteration and damage to the genome, malformations of the human body in the womb, impaired fertility in men and women, cancer in almost all organs, kidney failure and behavioral problems.

Bullets that miss their target also corrode very slowly, releasing their toxicity to groundwater and soil, poisoning the environment and humans. The use of DU creates a long-term health threat for civilians and the military alike, obstructs reconstruction through ravaged areas, spreads fear and is difficult and costly to remove. The properties of DU weapons make it impossible to completely decontaminate contaminated sites where they were fired. Even without a special prohibition contract, the use of DU ammunition with its consequences is contrary to applicable standards of international humanitarian law, human rights and environmental protection. This is where ICBUW’s efforts are aimed at banning these weapons and addressing their consequences for humans and the environment. In concrete terms, the distinction requirement of international humanitarian law, the human right to a healthy environment, especially protection against toxic substances, and, in particular, the precautionary principle / approach are violated.