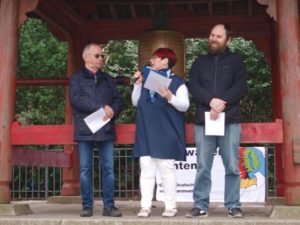 20 years later: the victims of NATO’s use of uranium weapons in the Balkans must finally be helped

As part of the (not UN-mandated and thus illegal) NATO operation „Allied Forces“ from March 24 to June 6, 1999, uranium ammunition was used in areas of former Yugoslavia (Kosovo, Serbia, Montenegro, earlier Bosnia-Herzegovina). Altogether, an estimated 13-15 tonnes of depleted uranium (DU) was used. The substance is chemically toxic and due to ionising radiation, it leads to serious health and environmental burdens and can cause cancer and genetic changes.

Especially now, 20 years later, the extent of the damage done shows. Many people in the contaminated regions suffer from cancer or have died. The medical care situation is often inadequate and it has proved too costly or completely impossible to decontaminate affected areas. The situation was described, for example, at the 1st International Symposium on the consequences of the bombing of former Yugoslavia with DU in 1999, which took place in June last year in Nis, dealing with possible humanitarian actions to help DU victims, up to the option of legal steps. ICBUW was represented by its spokesperson, Prof. Manfred Mohr.

The conference is an expression of a new, increased interest by the scientific and political public in uranium ammunition. A special commission of inquiry of the Serbian parliament was established for this purpose. It is collaborating with the relevant parliamentary commission in Italy, where there already is a strong case law in favour of the victims of DU deployment (in the Italian military). Interest and commitment also comes from media and the arts, e.g. in the case of the film „Uranium 238 – my story“ by Miodrag Miljkovic, which was given special mention at the International Uranium Film Festival last year in Berlin.

Beginning with the Ad-Hoc-Committee on DU, NATO denies any link between the use of uranium ammunition and harm to health. This attitude is characteristic of the military, which on the other hand does everything to protect its own troops against DU risks. NATO standards and papers refer to precautionary measures and the need to avoid „collateral damage“ in relation to the environment. However, priority must always be given to „operational requirements“.

It remains to be seen, to what extent judicial proceedings on the part of civilian, foreign DU victims is an effective method for holding NATO responsible. After all, human rights complaints are also possible; there is such a thing as a human right to a healthy environment, which also applies in and after the war. It is crucial that NATO and individual NATO countries acknowledge their political and humanitarian responsibility for the DU devastation that resulted from the 78-day war against former Yugoslavia. They must – unitarily – support the UN process, which (in the form of a series of resolutions of the General Assembly, most recently no. 73/38) highlights these key points in dealing with the use of uranium ammunitions:

The appeal, in the 70th year of the foundation of NATO, is directed especially towards the Federal Republic of Germany, which does not possess uranium weapons but impedes the UN process for years by obstructive behaviour, in particular by abstaining from voting in the General Assembly.

20 years later: Victims of NATO-mission in the Balkans must finally be helped | https://www.icbuw.eu/20-years-later-victims-of-nato-mission-in-the-balkans-must-finally-be-helped/ | 24. März 2019