The use of uranium weapons (DU ammunition) and its consequences in short and long-term is a particularly frightening example of environmental destruction by war and of the military use of toxic and radioactive substances with serious harm to civilians, foreign aid workers, military personel and our precious environment and ecosystem.

The debate on the impact of the use of DU weapons has intensified over the years since their first use. DU weapons are becoming more and more stigmatized, thanks to the several UN resolutions over the past years, the national parliamentary lobby activities and some national legislations as well as the work of organisations like ICBUW.

Also Euromil* is keeping the tradition alive to speak out clearly against the use of DU weapons. During the 120th Presidium Meeting in Brussels on 26 October 2019 Euromil approved the renewed the Position on Depleted Uranium (DU):

Euromil´s position on DU is clear:

Euromil strongly urges governments to ban the use of DU weapons and to use their influence to promote a worldwide ban. 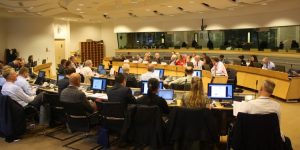 In its 2007 position paper Euromil already recognised that there may be long-term implications for the health of soldiers performing duties in areas where DU weapons were used. In both the 2007 and the 2019 paper the organisation argued for protective measures for troops before, during and after missions in areas contaminated as a result of the use of DU.

Altogether, as Euromil states, there is a growing link to discussion trends around the issue of “Conflict and the environment” as reflected within UNEA (UN Environment Assembly), the ILC (International Law Commission) and the UN Human Rights Council.

Finally, the paper refers to the national level where Belgium was the first country in the world to legally ban DU ammunition followed by Costa Rica while New Zealand and Ireland showed willingness to work on a ban.

During the 3rd Congress of Euromil in 2008 in Brussels, 35 associations from over 20 nations attended. Emmanuel Jacob, Euromil president distributed the book “The Human Cost of Uranium Weapons” amongst the participants and made an appeal to join the letter campaign “Write to your Foreign Ministry” to demand that they give their YES vote to the next UN voting on a resolution on uranium weapons.

All the time, there has been an intensive exchange and cooperation between ICBUW and EUROMIL, in particular its President Emmanuel Jacob, who is member of ICBUW´s Advisory Board. At the 110th Presidium meeting of Euromil in Rome, October 2014, the chairpersons of ICBUW Ria Verjauw and Prof. Manfred Mohr presented lectures on specific environment- and DU-related topics.

We are looking forward to continue this positive and important relationship…