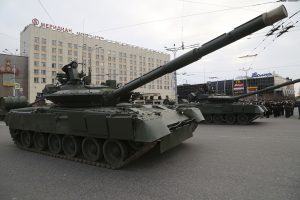 It was never a secret that the Soviet Union was (and Russia is now) working on new types of ammunition that would have maximum effectiveness in an armed conflict. DU ammunition was a big issue already in the Soviet era: The 3BM-32 „Vant“ ammunition designed for Soviet 125 millimeter tank guns contained a DU core. Russia has further developed its DU munition. According to an article of TASS news agency (based on a statement of the Russian Ministry of Defense), Russian T-80BV tanks are now to be equipped with such high-penetrating ammunition. The article states that tanks of the T-80BV series got the new gun 2А46М-4 with an improved stabilizer and the loading mechanism for the ammunition 3BM59 Svinets-1 and 3BM60 Svinets-2. The ammunition of the type „Svinets“ (English: „lead“) is a part of Russian arsenal since 1991: „Svinets-1“ has a uranium-tungsten carbide core and „Svinets-2“ uses depleted uranium.

„Svinets“ is the most powerful Russian tank ammunition. It is being called „ammunition with increased force“ and penetrates all modern armoured vehicles. The development of „Svinets“ had exactly this goal; the older ammunition of the Russian tanks could hardly penetrate the US Abrams or the Israeli Merkava tanks. So the crucial point is: the ammunition offers better penetration power and is therefore very effective.

According to a report by Dutch defence experts from the „Below the Ring“ website, Russia has been producing this special ammunition for several years, possibly as a replacement for existing tank ammunition.

The ammunition uses an aluminum sabot with three contact points – this is quite unique, since in most other APFSDS sabot uses only two contact points, says Below the Ring. Whether and how this affects the accuracy and the barrel wear is not known at present.

In their assessment, the experts refer to the comparison with the Soviet predecessor munition „Vant“: Compared to the 3BM-32 „Vant“, which was equipped with a 380 mm long DU penetrator, the two new „Svinets“ grenades have a 79 to 84 percent longer projectile, which should lead to a significant increase in penetrating power.

The problem of their use on Russian tanks is that the dimensions of the projectile go beyond the limits of the automatic loader and require its modernization. This problem has now been solved with the modernisation of the T-80 tanks.

According to the Russian Ministry of Defence, there are further plans to equip Russian tanks with DU ammunition of the „Svinets“ series. In the near future, not only T-80, but also T-72 and T-90 tanks will be modernized accordingly.

Furthermore, in May 2019 it was announced (Armswatch Post) that the US Army is interested in purchasing ammunition produced in Russia. A document of the US government has been published, which includes a list of the commercial ammunition (produced in non-NATO countries) – including Russian Makarov and Tokarev self-loading pistols and the AK-47, but also 122 mm GRAD missiles and two types of DU ammunition: 125 mm APFSDSDU and 125 mm APFSDSDU-T. The US Government wants to know the ability of the possible contractors to deliver these types of ammunition to undisclosed locations overseas outside of the US. The exact reasons for such market research are unknown.

The Russian military experts deny violating international law by developing and producing DU ammunition, but at the same time admit that it contains uranium and tungsten and is therefore assigned to a special technical category (“High-Power-Munition”). In several reports of the Russian media (e.g. by Ria Novosti) it is „justifiably“ pointed out that other countries also use such ammunition types. However, this is not a valid excuse: any kind of DU ammunition can cause lasting damage to human health and the environment. Not only the use of DU, but also the further armament with uranium ammunition and its modernization cannot be tolerated, no matter from which side. The efficiency of a weapon or the pursuit of its development alone is not sufficient for its legitimacy and acceptability…