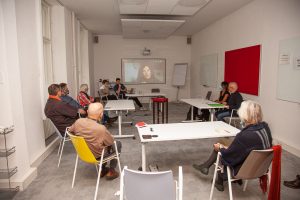 On Sunday, October 18th, 2020, ICBUW special event took place with the topic of the day of the IUFF – DU weapons. In the conference room at Marienstraße 19/20 (the ICBUW office), interested parties and members met to learn about the current state of affairs in the NGO and to exchange ideas. The event, which – despite the Corona situation – was well attended, began with a greeting to all participants from the ICBUW speakers Prof. Manfred Mohr and Ria Verjauw. The latter was, unfortunately, unable to attend the meeting in person due to the tense pandemic situation in Belgium. The French artist Léa Promaja was also involved and presented her fifty-minute radio documentary “Sprinkled” as part of the event. An audio series of random snippets of conversations that were recorded in Kosovo provided an insight into the life of the civilian population after the NATO bombings.

The artist stayed in Kosovo for five years and collected on her trip various pieces of opinion that portray the lives of the people and the consequences of the DU used on site. It was extremely interesting to note that even some doctors saw the bombings as positive and that NATO was not held responsible explicitly. Most of the statements, however, confirmed the sad assumption of an immensely increased cancer rates since the bombings, as several other scientific studies have already observed. People’s fear of developing cancer, as well as the observations of those who were already affected – whether directly or through their acquaintances and family members – were very noticeable and highlighted the precarious situation of the people in the region.

However, anger about the widespread ignorance regarding the harmfulness of DU ammunition and the missingproportionality of the use of force in Yugoslavian case also shaped the documentary. There seems to be an increasing tendency to cover up the facts, as Kosovo in particular is trying hard to maintain good relations with NATO and other EU states, so there is no room for allegations of illegal use of force. There is even a street named after NATO in the regional main city, Prizren, which is, in a sense, a mockery of those who have suffered losses as a result of the attacks. The artist has also traveled to Serbia and interviewed people there on the same topic – this will be the subject of „Sprinkled 2“.

Following the radio documentary, there was a lively discussion between the artist and the participants in the event. There was a great need to speak, although the discussion had to be ended prematurely because the schedule was very tight due to the afternoon event with the film „Balentes“ by director Lisa Camillo. Thereupon the event proceeded to the original topic of the meeting: the current state of affairs at the NGO. For this purpose, Ilia Kukin created a presentation that summarized the most important changes and decisions. Among other things, the volunteer team was presented again, a group of young people who support ICBUW in their efforts. Reference was also made to the articles published on the official website. It was reported on the human rights complaints of the Serbian lawyer Aleksic Srdan, who – at the same time – is trying to sue the responsible states directly – a delicate undertaking, given the (reluctant) position of the Serbian government. The case of the French gendarme Henri Friconneau, who fell ill with a rare angiosarcoma several years after the contact with uranium ammunition remains while working for KFOR, was also discussed.

The event ended with an overview of the activity on the ICBUW’s social media channels, where you can keep up to date with current DU topics. It was a great success, to which the excellent technical equipment also contributed in terms of overcoming the corona-related obstacles.