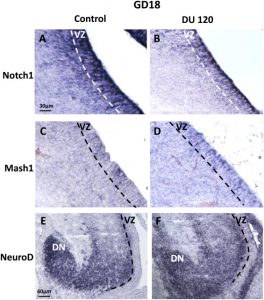 The following recent studies address the various effects of DU in the fields of health and environmental damage. The studies illustrate not only acute health risks to humans and the environment but also long-term consequences of contact with DU. One research paper illustrates how contact with depleted uranium during postnatal brain-development can be associated with depressive behavioral disorders in adulthood. Another study deals with the effects of chemical toxicity and radioactivity of DU, combining findings from in vivo and in vitro based studies. Furthermore one paper also addresses the environmentally damaging aspects of the use of DU ammunition in Bosnia and Herzegovina. The authors see the most pressing threat to the population in the dissolution of uranium from DU corrosion products and its subsequent transport through the soil profile into the groundwater.

The developing brain is known to be sensitive to uranium (U) and exposure to this element during postnatal brain development results in behavioral disorders in adulthood.

The results of several studies show that exposure of pregnant and lactating rats to DU affects brain development by causing disturbed cell proliferation and neuronal differentiation at the prenatal stage. Moreover, this exposure increased the pool of immature neurons in the dentate gyrus and induced depressive-like behavior in neonatal rats. Therefore, these data strongly suggest that exposure to DU during gestation and lactation affects brain development in embryos, foetuses and neonates with behavioral consequences in the offspring.

The full report provides details and information about the studies that have been done and covers the following issues:

As a complement to results from a previous study, the data shows that DU exposure during gestation and lactation may affect neurogenesis. Prenatal DU exposure disturbed signalling pathways of neural cell proliferation and early neuronal determination or induction at the prenatal and postnatal stages. The various steps of neuronal differentiation are regulated by many specific signalling pathways. Further investigation is needed to explore more pathways and to complete the first observations.

Long-term low-level uranium exposure is a hazard to human health, particularly for pregnant women and children, and further epidemiological studies are needed to examine its potential consequences on behavioral disorders.

(Funding information: This study was part of the ENVIRHOM research program supported by the French Institute for Radioprotection and Nuclear Safety (IRSN) and European DoReMi program.)

Chemical toxicity and radioactivity of depleted uranium: The evidence from in vivo and in vitro studies

This is a review of more than 75 published papers about the current state of knowledge on chemical toxicity and radioactivity of depleted uranium (DU) and their effect on living systems and cell lines in relation to exposure type and duration, as well as DU properties.

Special attention has been dedicated to chromosomal aberrations, DNA damage and DNA breaks, as well as micronuclei formation and epigenetic changes, as DU has recently been considered a possible causative factor of all these processes.

The full report provides details and information on in vitro studies on the effects of DU and in vivo studies on DU-related chemical toxicity and radioactivity.

Previous research on the consequences of either acute or prolonged depleted uranium exposure managed to prove that, as a heavy metal, this element is capable of inducing chemical toxicity and cell damage in the form of cell morphology alteration, immune response and/or apoptotic death, which is evident in the in vitro studies reviewed in this paper.

Furthermore, in vivo studies confirmed chemical toxicity of DU by frequent alterations in the immune system response to exposure.

Radiation-related effects are still, however, in the domain of speculation. Studies done in vitro investigating cell damage as a result of radioactivity showed that DU is less damaging to cell cultures when compared to natural uranium containing higher amounts of the 235U isotope. In vivo studies failed to determine a significant increase in transformation efficiency as a consequence of either acute or chronic irradiation of the investigated models. In order to either confirm or disband the hypothesis that DU irradiation is capable of inducing neoplastic changes in vivo and in vitro, it would be necessary to conduct experiments using uranium isotopes of different radiation potential, different DU concentrations, as well as to conduct studies with long-term follow-up periods that would truly reveal the consequences of prolonged exposure to low-dose DU, which is the most common type of exposure encountered in everyday practice.

Literature also demonstrated that chronic exposure to DU affects health more than acute exposure, as well as that insoluble DU particles tend to cause more frequent DNA breaks when compared to soluble DU. Longer follow-up periods would definitely be necessary to fully assess the long-term effects of either acute or chronic exposure to DU particles on genome instability. The properties of DU when it comes to radiation are, however, opposing the statements that it is causing neoplastic transformation simply due to its low radioactivity.

Finally, some studies presented in this review consider age an important variable, while other studies reported that there seems to be no correlation between age and any of the possible changes induced by DU. This leads to the conclusion that an increased frequency of changes that correlated positively with older participants might simply be a result of mutation and damage accumulation over lifetime and not solely due to exposure to DU.

(Funding Information: This research did not receive any specific grant from funding agencies in the public, commercial, or not-for-profit sectors.)

Hundreds of tons of depleted uranium (DU) ammunition were used in previous armed conflicts in Iraq, Bosnia and Herzegovina, and Serbia/Kosovo. The majority (>90%) of DU penetrators miss their target and, if left in the environment, corrode in these postconflict zones. Thus, the best way to understand the fate of bulk DU material in the environment is to characterize the corrosion products of intact DU penetrators under field conditions for extended periods of time.

However such studies are scarce. To fill this knowledge gap, we characterized corrosion products formed from two intact DU penetrators that remained in soils in Bosnia and Herzegovina for over seven years.

The U minerals resulting from the corrosion process control U solubility and thus its rate of release into the surrounding soil. This is of great concern as U released from thousands of penetrators scattered around the countryside could potentially migrate through the vadose zone and contaminate the underlying aquifer(s). Characterization of DU corrosion can thus provide invaluable information to model U release during and after corrosion and has direct environmental implications for DU impacted regions.

The United Nations Environment Program (UNEP) and Spiez Laboratory (Switzerland) conducted field investigations in these postconflict regions and recovered corroded penetrators that were made available to our team. The study was able to capture the result of long-term incubations under field conditions.

The radioactivity of natural U deposits or spent nuclear fuel could generate a sufficient concentration of H2O2 by alpha radiolysis of water for the transformation of uranyl oxide hydrates to studtite. Although depleted U shows a much lower radioactivity than natural U, the results from the present study show that a DU penetrator located in the vadose zone for over 7 years produces a sufficient amount of H2O2 to form studtite from metaschoepite. This is particularly true in thin water films on the surface of U minerals or in the water layer trapped in between two U oxide particles, because those are the local environments most likely to accumulate the relatively elevated peroxide concentrations needed for this transformation to occur.

As stated previously, more than 90% of DU material used during conflicts remains in penetrator form, and can corrode in surface environments of post-conflict zones for up to 25 years.

Consequently, the most likely hazard to the local population would be the dissolution of U from DU corrosion products by environmental waters and its subsequent transport through soil profile into the aquifer. Drinking water obtained from U contaminated aquifers may result in radiological and chemical toxicity. Therefore, it is important to evaluate the influence of the mineralogy of DU corrosion products on U solubility.

Therefore, by the time the DU metal in the penetrators is completely corroded (about 22−26 years), the fractions of becquerelite and studtite are expected to be much higher.

Hence, becquerelite and studtite, together with metaschoepite, would significantly control the solubility of DU in similar environments. The authors propose that “the transformation of metaschoepite to becquerelite or studtite in the DU corrosion products would decrease the potential for mobilization of U from corroded DU penetrators exposed to similar environments in post-conflict areas.

It is thus important to evaluate the change in U solubility when the transformation of metaschoepite to studtite or becquerelite occurs.