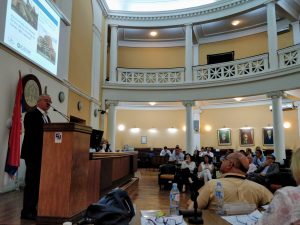 The war in Yugoslavia has been over for 20 years, but the consequences are still there – and destruction is not the only one. In this war, as in many others, uranium ammunition was used, mostly in the last days before the end of the conflict, when the defeat of the Serbian army was already clearly visible. From June 17 to 19, 2019, the Second International Symposium „Consequences of the Bombing of the Former Yugoslavia with Depleted Uranium 1999“ took place in Nis, Serbia. This year’s conference had the slogan „With Truth to Justice“ and brought together professors, lawyers, journalists and other experts from Serbia, Russia, Germany, Switzerland, Malta, Greece, North Macedonia, Bulgaria, Sweden and Italy to discuss legal, political, economic, environmental, health and other aspects of the NATO bombing in 1999, as well as to find the appropriate solutions – legal and political – for the victims. The conference, which took place in the University of Nis, was covered by different journalists and media from all over Europe, with Serbian television taking particular interest in the event. This year ICBUW was represented by Prof. Manfred Mohr and the intern Ilia Kukin.

Twenty years have passed since the bombing of Yugoslavia by NATO – and unfortunately those years were the „Years of Silence,“ as the title of the book on events in Nis states. Therefore, the aim of the symposium was, among other things, to draw attention to the subject of DU – also so that similar things will not happen in the future.

Prof. Dr. Srdan Aleksic is the main organizer of the symposium. For the successful Serbian lawyer, DU is more than just a legal or scientific topic, it is a personal burden he has been carrying on his shoulders for years. He sees the use of DU ammunition as a clear violation of international conventions, because the radioactive ammunition causes long-term damage to the health of the population and to the environment. Although numerous newspapers have already reported that after 20 years Serbia will sue NATO for damages for the affected population and the polluted environment, the situation is still very complicated.

The Serbian case is also not so easy in itself – the number of victims of uranium ammunition increases and no one wants to take responsibility for it. The current political situation in Serbia seems to contribute even more to this complexity. The third day of the symposium was to be spent in the town of Vranje, where an excursion to the places where the DU ammunition was fired in 1999 should have taken place. The excursion, as well as the meeting with the mayor of Vranje were cancelled the day before, for unclear political reasons. Some representatives of the Serb military and various ministries also wanted to attend the symposium, but then they also had to cancel for reasons that are unknown. But one can assume that Serbia’s desire to join the EU had some influence on the attitude of the Serbian authorities towards the conference. Support from the Serbian state therefore should rather not be expected.

This year the conference was more broadly themed and better organized – there were two panels covering a series of topics: legal, political, economic, environmental issues, as well as health and international security. This ensured that as accurate and as deep as possible insight into the current situation in Serbia was provided. Legal options, necessary humanitarian action, media work and many more topics were discussed. There were also reports on the ongoing processes – for example, the lawsuit against NATO requires several steps yet to be taken and several obstacles yet to overcome.

The speech of the ICBUW speaker, Professor Manfred Mohr, discussed the human rights aspects of the Serbian DU question. European and international human rights mechanisms are often forgotten or not taken seriously – and that is precisely what can help the victims of the DU bombing and draw more attention to the situation in Serbia (especially if one appeals to the UN human rights system). The causality problems can also be evaded – there are several documents in international law that call for or recognize the precautionary approach. The mechanisms of various international human rights treaties can also be used if Serbia has not signed them (or additional protocols) – keyword: extraterritorial applicability of human rights.

The speech also highlighted the possibility of complaining to the UN Special Rapporteurs – a way which is promising and relatively easy. While the processes of international humanitarian law demand certain steps on the part of the state, the human rights mechanisms can be used by victims individually or collectively.

Even today, the topic „NATO bombing“ remains a taboo in Serbia – neither politicians nor ordinary people want to talk about that. That’s why the victims remain helpless and alone. The second international symposium shows, however, that there are still people who care about the subject and the victims, people who try to help those affected and bring the NATO countries to account. Twenty years have passed, but the long-term consequences of the DU munition are still there. If we do not act now, states will continue to use DU, as the events in Syria 4 years ago show. Discussion, exchange, publicity, legal processes (especially in human rights area) must be continued so that the Yugoslav ecological disaster does not happen again elsewhere.

2nd International Symposium „Consequences of the Bombing of the Former Yugoslavia with Depleted Uranium 1999“ | https://www.icbuw.eu/2nd-international-symposium-consequences-of-the-bombing-of-the-former-yugoslavia-with-depleted-uranium-1999/ | 19. August 2019