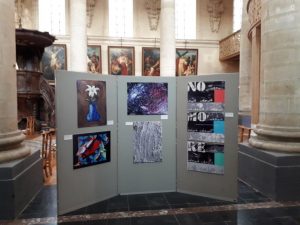 Again and again the Japanese Hibakusha repeat their call:

No More Hiroshima
No More Nagasaki
No More war
No More Hibakusha! 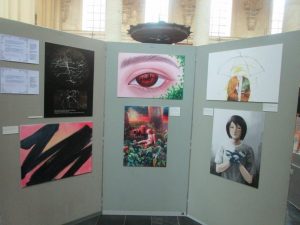 The exhibition has been devised and developed by the Peace Movement of Leuven (with „Belgian Coalition Stop Uranium weapons“ as one of the member organization) together with Pax Christi Flanders, with support from the City of Leuven and the St. Michiels Peace Church.
Several Japanse artists and students specially designed art work for this one month event:

The topic of their artwork is: ‘How young people see a future without nuclear weapons’. How do young Japanese people experience their history? How do they regard nuclear weapons today? 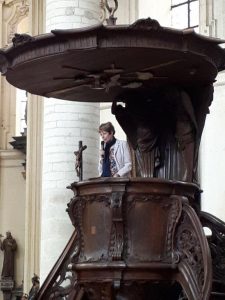 Els de Groen, member of the ICBUW Advisory Board, writer and poet, was invited to open the exhibition and to deliver a speech from the pulpit in the peace church: the traditional Vredeskansel. Her speech was entitled “A plea for doubts”.
From 2004 until 2009, de Groen was a member of European Parliament where she – in 2008 – has initiated a joint motion for a resolution to ban depleted uranium weapons. This motion has been adopted with an overwhelming majority of 94%.
A fragment of her speech: “The craziest thing of all is that we do not even have to use nuclear weapons in order to destroy our planet. A big part of the waste we produce, consists of radioactive elements that did not exist before, e.g. depleted uranium that has a half-life of 4,5 billion years. Science is knowledge, wetenschap, Wissenschaft… But do we also know the limits of our knowledge, are we aware of our destructive skills and -simultaneously- failing morality?” 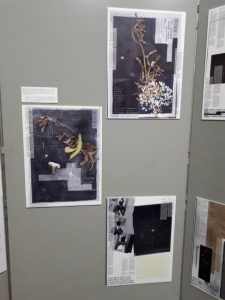 The link between DU weapons and nuclear weapons is clear: Any use and release of radioactive materials into the environment causes harm to the environment and to all living creatures. DU weapons have both chemical and radioactive properties that cause damage to genetic material and other tissues. The combined effect of both radioactivity and chemical toxicity are of great concern. Until today we are not aware of (explicit) studies done on the combined effects. Anyway, both properties – radiation and chemical toxicity – are likely to be more than additive…