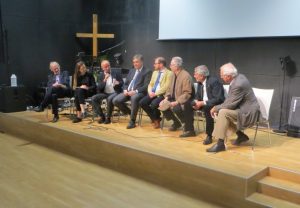 On the occasion of the 32nd anniversary of the nuclear disaster in Chernobyl, the Austrian Forum Wissenschaft & Umwelt organised a conference on the global phase-out of nuclear energy from civil and military use.

Representatives from politics, science and civil society gathered in Vienna on 26 April to discuss the nuclear phase-out and nuclear weapons. The lectures and panel discussion were attended by many experts, some of whom have been engaged with opposing the use of nuclear energy for decades. The City of Vienna itself – headquarter of the International Atomic Energy Agency – is committed to opposing nuclear energy at the national and European level.

The theme of the event was both, the peaceful use and the military use of nuclear power – both of which are closely related, and part of the „nuclear chain“.

ICBUW Germany was represented with a contribution on depleted uranium (DU) weapons by Prof. Manfred Mohr. In addition to the operation of DU ammunition, Prof. Mohr discussed the impact on humans and the environment, as well as cases of its deployment in armed conflicts – the work of ICBUW and its partners attracted wide interest.

The diverse contributions dealt with Austrian perspectives as well as international problems and possibilities for action. As recent success on an international level, the Treaty on the Prohibition of Nuclear Weapons was discussed as well. Nadja Schmidt, chairperson of ICAN Austria, was and still is directly involved in this project and presented her experiences and her optimism regarding future successes.

The panel discussion, moderated by Dr. Peter Weish (president of the Forum Wissenschaft & Umwelt), offered an interesting exchange in which the experts did not come to terms on all issues but could agree on essential undertakings and goals. For example, it was debated to what extent the new treaty means a ban in international law, and over what period of time the treaty is expected to enter into force. Furthermore, the general effectiveness of international law was discussed. Prof. Mohr, who also represented the German section of IALANA, advocated a realistic consideration of international law, which, despite some severe violations in the past, works well in most cases.

Jointly, experts and the audience found answers to the question of what one can do as an organisation but also privately against the use of atomic energy and nuclear weapons. An interesting example is the initiative „Don’t Bank on the Bomb„, which documents the investment activities of many large banks worldwide and calls for divestment in the armaments sector.

The experts and participants made the conference a success and facilitated an exciting exchange, as well as the further networking of organisations and science in the German-speaking world, all in the spirit of a further insight of the day: Only through international collaboration can transnational problems and dangers can be adequately addressed.