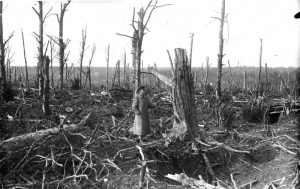 The article ‘‘Environment – Victim of war’’, written by ICBUW chairperson Prof. Manfred Mohr and published in the current edition of the journal ,,Politische Ökologie’’ deals with the (serious) effects of armed conflicts on the environment and describes the relating developments in international politics. In addition, it offers an insight into the legal norms and guidelines that provide approaches to deal with the topic.

The legal requirements for the treatment of this topic can be derived from international humanitarian law, environmental law and the protection of human rights. A significant meaning is dedicated to the precautionary principle, or approach. The approach by the way of human rights places the victim protection in the center of interest, as it is in Treaty on the Prohibition of Nuclear Weapons, together with environmental remediation.
Various Initiatives have already been launched this year concerning the problem-focused coping of ’’PERAC’’. Already in 2016 and 2017, the UN Environmental Assembly (UNEA) adopted resolutions regarding the prevention of the environmental pollution in areas affected by armed conflicts and terrorism.

The Conflict and Environment Observatory (CEOBS) has just reported that a motion ahead the IUCN-Congress requests support for the constantly evolving legal framework on environmental protection in armed conflicts. The IUCN World Conservation Congress, which should have taken place in June this year, where the motion should have been presented, was postponed to January 2021, due to the Covid-19 pandemic. The motion especially focuses on the preservation of biodiversity during and after armed conflicts.

Last year the UN International Law Commission (ILC) adopted on first reading 28 draft legal principles related to ‘’PERAC’’, which will be completed in 2021. The actual implementation of the principles, which will be defined next year remains suspense-packed, as they will be playing a key role for the worldwide accomplishment of ‘’PERAC’’.