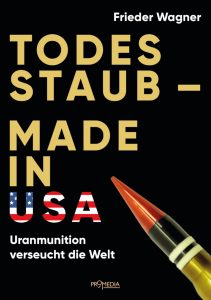 Deadly Dust (currently only available in German from Promedia Wien) hits the shelves at the right time: for one, the book’s release parallels the efforts of Serbian lawyer Sdran Aleksic and his team to assist the victims of the NATO-bombing with uranium ammunition in their plight for aid (mentioned on page 16). Beyond this, the time has come for a reappraisal of this topic’s treatment by the media and in politics, (particularly) in Germany. Nobody is better suited to this job than Frieder Wagner, who succeeded in bringing the topic of uranium weapons to the attention of a broad audience in this country. In his book, he mentions over 340 events – screenings and panel discussions – through which more than 30.000 students and adults were reached (p. 126).

Wagner describes how his work was handled by the media and in the political sphere with sharp criticism and in great detail. For example, he recounts how the German public radio station ‘Deutschlandfunk’ prevented one of his features from airing and outlines 15 objections presented to him by the station, as well as his corresponding responses (pp. 103). He also rightly criticises the German practice of abstaining at the UN General Assembly in voting on the UN Uranium Ammunition Resolution. The situation is noticeably deteriorating, as expert discussion rounds concerning the topic were still held at the Foreign Office (and attended by me as a representative for ICBUW) in 2008 and 2010 (see pp. 136).

ICBUW fights for a ban on depleted uranium weapons, although the campaign does not, as Wagner claims, ‘strive for a lower standard than what is currently the law’ (p. 168). Accordingly, on https://www.icbuw.eu/en/the-problem/ it is unambiguously stated that: ‘Even without a special prohibition contract, the use of DU ammunition with its consequences is contrary to applicable standards of international humanitarian law, human rights and environmental protection.’

In spite of all resistance and oppressive efforts, media professionals have successfully continued to bring the topic to public attention after the release of Wagner’s film ’Deadly Dust’ (which comes with the book!). Frieder Wagner himself recognises Karin Leukefeld and Markus Matzel’s excellent work for the documentary  ‘Leiser Tod im Garten Eden’ (‘Silent Death in the Garden of Eden’, p. 29). Apart from this, however, he highlights the silence of the media (p. 159) and mentions that ‘things are not looking too great’ regarding the topic at hand (p. 206).

To ensure that things do not stay this way, journalists and the wider media have created a range of activities, including the International Uranium Film Festival, which works in close collaboration with ICBUW and IPPNW. Wagner’s dedication itself forms an important part of this movement and is most recently embodied in his highly-recommended book ‘Deadly Dust – Made in the USA: Uranium Weapons Contaminating the World’