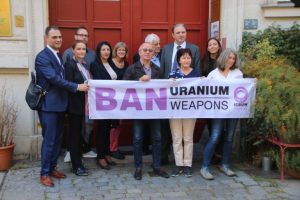 Within the setting of the International Uranium Film Festival in Berlin, members, friends and supporters of the ICBUW met on October 13th, 2018, for a working meeting in a cozy round.

Main topics discussed were the future appearance and the work of ICBUW. For example, how ICBUW could reach a younger audience, i.e. through joint projects, but also in general about the own capabilities. This could be greatly enhanced by social media such as Facebook, Twitter and Instagram, but even a regular newsletter on the upcoming new bilingual ICBUW website could have the desired effect.

Furthermore, the latest developments in the context of the DU topic must be regularly made known, not only internally, but also externally, for instance on distribution lists.In addition, ICBUW must be prepared to make DU- related recommendations to UN events (making use of the ECOSOC status), European and national parliamentarians and NGOs.

In addition, advice was given on the tasks of the future ICBUW Advisory Council, which should be involved actively.Since ICBUW is a non-governmental organization mainly funded by donations, it also seemed particularly important to talk about funding opportunities, so the round took up the topic of „fundraising“. ICBUW will try to intensify the contact with foundations in order to establish new (financial) partnerships.

Of course, the group also dealt with the background of this meeting: The International Uranium Film Festival, which will take a break in Berlin next year. That is why the idea of a separate ICBUW event in 2019 came up, in which the Kosovo war 20 years ago and NATO’s involvement in DU bombings could be taken up. There could be a series of activities along this theme.The „Serbian Project“, which was also mentioned at some special ICBUW events of the IUFF, was also discussed further. The Serbian delegation informed the participants about the situation in Serbia and what support they hoped for from ICBUW. To investigate this request, Prof. Manfred Mohr, one of the ICBUW spokespersons, will investigate possible legal and political action to be taken, i.e. in the frame of the mechanisms of the UN.

For the future internal cooperation, it was suggested to organize a working meeting every two weeks in the Anti-War Café of Heiner Bücker. In addition, there are ideas for another confernce next year building on the success of this year’s event in Nis (Serbia).

ICBUW working meeting in Berlin on October 13th at the ICBUW office in Marienstrasse 19-20 | https://www.icbuw.eu/icbuw-working-meeting-in-berlin-on-october-13th-at-the-icbuw-office-in-marienstrasse-19-20/ | 03. Dezember 2018