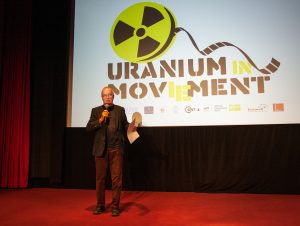 The festival, held for the 9th time in Berlin, was a great success. This was reflected in the number of visitors as well as in the selection of films and topics, which were met with great interest. The opening film „Television Event“ illustrated the possible lasting influence of film art (here in the form of „The Day After“) on social processes – even world politics – and thus the „philosophy“ of the festival. At this year’s festival in Berlin, ICBUW was a co-organiser (for the first time) and was therefore involved in the planning and organisation of this year’s festival.

Both in the greetings (from ICBUW, IPPNW, etc.) and during the course of the festival
the connection to the war in Ukraine, triggered by Russia’s aggression, and to the nuclear dangers and fears emanating from it.

The highlight was undoubtedly the screening of the IUFF-award-winning film „Balentes
in the presence of its director Lisa Camillo. The film illustrates the destruction of the
the destruction of the environment by war and the military, in which depleted uranium (DU), among other things, plays a role. At the same time, however, it shows the possibility for resistance of the people and civil society. In a very inspiring and moving way, Lisa Camillo, in conversation with the ICBUW panel and the audience, made her personal involvement in the making of the film clear. ICBUW and Lisa agreed on the continuation of the cooperation and exchange with ICBUW, possibly including DU-related research in relation to the Ukraine war.

A large part of the success of this year’s festival in Berlin was due to the high level of commitment of the participants, especially the Berlin festival producer Jutta Wunderlich as well as the
co-organisers. Outstanding was also the moderation by actor Christoph Michael Hofmann, who contributed a lot to the good atmosphere of the festival.

We can already look forward to the anniversary festival in 2024 and the special events leading up to it next year – ICBUW will definitely be there again.