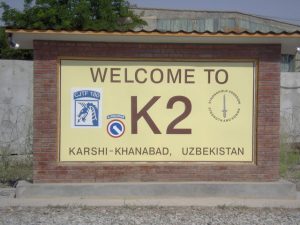 A bipartisan group of lawmakers in the United States has released a compilation of recently declassified Department of Defense documents in July which indicated that US forces stationed on a Central Asian military base after the 9/11 attacks were likely to be exposed to a mixture of toxins and various dangerous substances – including DU. This, some experts believe, has led to increased cancer rates among US soldiers and military personnel previously stationed there.

The Karshi-Khanabad military base (often referred to as „K2“ in documents) in southern Uzbekistan was a key military base in the war on terror in Afghanistan between 2001 and 2005. Several thousands of US soldiers were stationed there during that time – but one fact was kept silent: according to the 2001 report, the ground around the military base was contaminated with jet fuel. But that was not the only problem – a whole range of other dangerous substances were also found in the soil. The pollution of the environment around the base was confirmed by an additional report from 2004, which shows that although the health risk was relatively low, the potential for „daily exposure to radiation for up to 100% of the staff“ still existed.

The authorities are now admitting that the contamination had serious consequences for the soldiers and personnel: According to a 2015 study by the US Army, service members who were deployed on K2 were more than five times more likely to develop cancer than those who were accommodated on bases in South Korea. Service members stationed on K2 have been exposed to a variety of chemical and radiological hazards, including depleted uranium, chemical weapons, fuels and solvents.

The possible cause of the contamination is the military activity of the Soviet Union in the past and the consequences of it. According to the Defense Department, Soviet missiles were destroyed there a few years before the base was used by the US military. The main suspect in this case is the R-60, Russian, formerly Soviet, air-to-air guided missile.

„This destruction contaminated some areas of the surface around the base with low-level radioactive depleted uranium and asbestos,“ the document says. Attempts were made to cordon off the contaminated areas, but the personnel were never informed. On the contrary, it was repeatedly told on K2 that there was no significant risk to the soldiers. Senators Dianne Feinstein, Marsha Blackburn and Tammy Baldwin presented an act of parliament in August to aid K2 veterans. The VA (United States Department of Veterans Affairs) should avoid repeating past mistakes like it did with Vietnam veterans, and quickly move forward with recognition and coverage for any diseases associated with exposure to toxic substances such as depleted Uranium – said Senator Baldwin. In 2019, the Military Times reported on the discussion in the lawmaking, whether the service in Iraq or Afghanistan should be treated as a risk factor for health when it comes to veteran benefits.

For Uzbekistan, uranium is both a fortune and a misfortune. In the Soviet era, Central Asia was the country’s “uranium center”. Uzbekistan was one of the most important sources of Russian uranium supplies until independence in 1991. Until then, uranium production took place in Uzbekistan, Kyrgyzstan and Tajikistan, with little credit given to national borders and a large part of the production was taking place in Tajikistan. Uranium still plays a major role in the Uzbek economy today. The country is the seventh largest uranium supplier in the world and is constantly expanding production. Japanese and Chinese joint ventures are active in the uranium economy in the country, particularly in relation to black shale. However, the country is still struggling with the ecological consequences of the Soviet uranium mining  – in March 2017 the EBRD (European Bank for Reconstruction and Development) and the government of Uzbekistan signed an agreement on the process of environmental rehabilitation for Central Asia in Uzbekistan.