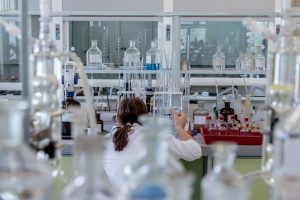 It deals with toxic substances, including DU, which is suspected of being one of the triggers for the collection of diseases known as Gulf War Syndrome. It is suspected that a significant amount of the symptoms seen in a surveillance study in veterans, were due to mitochondrial DNA damage in the body, as the mitochondria lack the nucleotide excision DNA repair mechanism. This damage is believed to be due to the interaction of several mitochondrial mutagens, including DU.

Uranium is capable of damaging vulnerable parts of the body and has especially a nephrotoxic effect. During the Gulf War, soldiers were mostly exposed to DU by inhalation. However, a proper interpretation of the pathology of the veterans seems often difficult, due to various disturbing factors such as dust, pesticides, drugs, etc.

A significant trigger for the syndrome could have been the interaction of these disturbing factors. For example, pyridostigmine was prescribed to the soldiers as protection against chemical weapons. It is also hypothesized that the significant increase in cancer rates in Iraq is not necessarily related to DU exposure, but to the exposure to polycyclic aromatic hydrocarbons (Paks) in oil well fires.

Nevertheless, DU can be expected to have an additive toxic effect on mitochondrial DNA. The article ends with the working hypothesis that depleted uranium cannot be proven to be the primary cause of the consequential damage suffered by Gulf War veterans. However, the toxic effect of DU is not negated; instead, the full extent of the harmful substances must be considered.

The article can be obtained with a university account, otherwise, there is a charge for its purchase.

The second paper „Nanometer-micrometer-sized depleted uranium (DU) particles in the environment“ was published in the Journal of Environmental Radioactivity in January 2020 and summarizes the current state of knowledge on the nanometer and micrometer depleted uranium (DU) particles in the environment. The article was written by Ole Christian Lind, Jochen Tschiersch and Brit Salbu and analyses released DU particles in different crystalline structures and oxidation states.

Uranium is less radiotoxic with decreasing enrichment, while the chemical toxicity remains constant, so the toxic effect of DU is mostly due to the chemical component.  It can be detected in various physic-chemical forms which have an influence on its transfer to the environment. In addition, the weathering rate of uranium also plays a role, which also affects distribution, as soils and sediments act as sinks and retain particles, as observed in laboratory experiments.

Hundreds of thousands of particles with several milligrams have already been found in soils, which have been contaminated by uranium accidents, so it is important to understand how DU behaves after exposure. In summary, it can be concluded that the properties of DU particles and their impact are influenced by several factors, such as particle size, release scenario, and environmental geochemical processes.

On 21 June 2020 the third article entitled, “War and the environment: The disturbing and under-researched legacy of depleted uranium weapons” was published in the Bulletin of Atom Scientists, written by Elena Bruess, Koe Snell and a report by Madhurita Goswami.

The report looks at the impact of the DU bombing on the civilian population in Iraq and provides information on the problematic political context regarding DU. At the beginning of the article, environmental engineer Al-Azzawi reports on her research.

A concerning factor that Al-Azzawi noticed, was the 60 percent increase in leukemia rates among children in Basra between 1990 and 1997, which could indicate depleted uranium as a culprit. She also complained that a lack of research and education was evident in post-conflict societies in Iraq and Syria – and that the clean-up efforts of both UN member states and the affected communities have miserably failed.

The US Department of Defense also vowed to stop the use of DU munitions in 2015. Despite this promise, thousands of shots with DU were fired during airstrikes in Syria within the same year, according to the Pentagon. Doug Weir, Director of Research and Policy at CEOBS (Conflict and Environment Observatory) explains the cause:

“It comes down to military utility. Militaries believe they have to use this weapon because it’s the best possible weapon for defeating enemy armor, and any other considerations are secondary today to the military imperative to use it.”

The WHO has also admitted that there are gaps when it comes to research on DU, but still reports to not be acquainted with any new studies on the health risks of heavy metals that would deviate from the conclusions and recommendations of its 2001 report on depleted uranium. However, it is very difficult to carry out accurate studies on the concrete effects of DU, as Weir confirms:

“With the general collapse of the healthcare system, malnutrition, and everything else that goes with it, an epidemiological study to track cancer, for example, in a population in Iraq would be next to impossible to undertake.” Weir said. “Could you track 5,000 or 10,000 or 20,000 people in Iraq over a period of 10, 15, or 20 years with that much internal migration and disruption to the healthcare systems?”