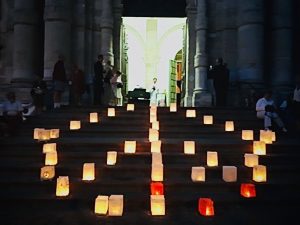 The Belgian Coalition ’Stop Uranium Weapons’ has put together an exhibition in St Michael’s Peace Church in Leuven, Belgium. The title of the exhibition is:

Depleted uranium weapons are part of the whole nuclear chain because depleted uranium is a waste product from the nuclear enrichment process.   During every stage of the chain there is damage, contamination, and pollution of the environment.

Uranium weapons are not classified as nuclear weapons but as conventional weapons.  They consist mainly of depleted uranium (DU), a radioactive and chemically toxic heavy metal, whose density is 1.7 times greater than that of lead.  DU is a by-product of enriching uranium for nuclear fuel for nuclear reactors and nuclear weapons.  Owing to the high density of uranium, it has the property of being able to be processed as an armour piercing projectile.  So, this toxic metal can be used for the development of new weapon systems.

During the first stage of the nuclear chain – uranium mining – gradually over time protective measures for the mining communities have been taken.

However, notwithstanding, measurements by independent organisations, such as the French CRIIAD, found dangerous levels of radioactive and chemical contamination in Arlit, Niger, in 2017.

The town of Arlit in Niger was due to become a ‘little Paris’.  However, the profit from mining goes to the state and to the companies.  The inhabitants of Arlit live in misery and poverty.  There is no running water; the water has to be brought to the town from land outside.  People use radioactive, contaminated waste from the mines to build their houses.

CRIIRAD also discovered some years ago much too high levels of radioactivity on some paths in France which had been built with radioactive waste from former uranium mines.  This is only one example which shows that the clean-up of the legacy of radioactive and chemical pollution from uranium mining has far from been achieved.

The last stage in the nuclear chain: the dumping of nuclear waste occurs mainly on the territory of indigenous people.  These people have seen their environment damaged and polluted and their way of life completely disrupted.  They also suffer damage to their health.

From 1944 to 1986, nearly 30 million tons of uranium ore were extracted from Navajo lands.  Many Navajo people worked in the mines, often living, and raising, families in close proximity to the mines and mills.  Today, the mines are closed but a legacy of uranium contamination remains, including the 523 abandoned uranium mines, as well as homes and water sources with raised levels of radiation.  The health effects include lung cancer, bone cancer, impaired kidney function among others.

From 1994 onwards, the EPA (Environmental Protection Agency, USA) has been funding the clean-up of the radioactive legacy.  After two five-year plans (2008-2013 and 2014-2019) for the clean-up by the EPA, there is now a ten-year plan running (2020-2029) for the clean-up, with the EPA working together with the Navajo Nation and some other organisations.  This situation clearly shows how serious the legacy of historic radioactive pollution is.  It should also be remembered that between 1944 and 1988, the mining of uranium was mainly to provide fuel for nuclear bombs.

Every stage in the nuclear chain leaves behind pollution, suffering and death.
ICBUW’s goals are to address the consequences for humans and the environment of DU weapons, to continue to stigmatise their use, and ultimately to have DU weapons banned.

ON THE OCCASION OF THE MEMORIAL FOR THE BOMBING OF HIROSHIMA AND NAGASAKI | https://www.icbuw.eu/on-the-occasion-of-the-memorial-for-the-bombing-of-hiroshima-and-nagasaki/ | 19. August 2022