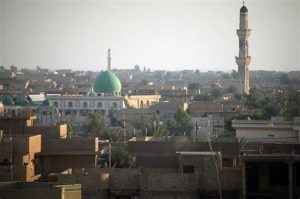 The city of Fallujah lies approximately seventy kilometres west of Baghdad on the Euphrates river and has been battling a severe humanitarian crisis since November 2004 when the city experienced brutal fighting between Iraqi insurgents and US-led forces using depleted uranium. The long-term consequences of which are still affecting the local community to this day.

A recent article on the subject by Laura Gottesdiener, published last November in The Nation – the oldest, very influential weekly magazine of the United States – extensively describes the challenges that medical professionals have faced due to widespread community exposure to toxic materials. Gottesdiener tells the story of Samira Alani a paediatrician who runs a centre for children with birth defects, a common consequence of parental exposure to depleted uranium. Alani previously worked in Fallujah’s General Hospital and was one of the first in the city to document the high occurrence rates of birth defects that were inundating the maternity ward at the time. Since her initially simple methods of documentation, Alani has authored or co-authored more than a dozen studies that conclude her preliminary findings including one published in the Journal of the Islamic Medical Association of North America that found birth defects in Fallujah to be twice as common as the global average.

Within the article Gottesdiener lays out the history of birth defects as a consequence of warfare. She includes the evidence that has been recorded from US testing of WMD’s between the 1940s and 1970s and highlights the legal cases brought by US army veterans from the Vietnam war against the manufacturers of Agent Orange, with the US government backing the corporations. She includes the recent work of Wim Zwijnenburg, expert of PAX Netherlands (www.paxforpeace.nl) and member of the ICBUW Steering Group. Documents acquired through the Freedom of Information Act and released by the Department of Defence proved the deployment of depleted uranium during both Gulf wars but notably less in and around Fallujah than in other areas of the country. Nevertheless, as Zwijnenburg observes: “A larger focus on toxic remnants of war beyond munitions is needed to understand the environmental health risks”. Interviews conducted by The Nation, with a slew of scientists, doctors, and anti-depleted-uranium activists concurred with Zwijnenburg, that the files’ narrow focus on the metal has precluded an analysis of the overall public health and environmental effects of the conflicts in Fallujah and how they may be linked to birth defects.

Gottesdiener considers other important arguments around the causal debate for the horrific rate of congenital diseases in Fallujah. One of which is the more general humanitarian crisis in Iraq over the last fifteen years. The WHO concluded that the economic sanctions placed on Iraq following 1991 “put back the quality of health care by fifty years”. By 1996, a report by the organisation declared the availability of folate, key to the prevention of serious congenital disorders known as neural tube defects had decreased more than 77 percent. Omar Dewachi, a renown doctor and medical anthropologist is quoted in the article as saying that “nutritional factors are known to cause congenital anomalies and defects, and that has been a very understudied pathway for birth defects in Iraq”.

Another causal effect she considers is the existence of alternative toxic chemicals in the Fallujah area. Not only were toxic materials such as white phosphorous deployed on the battlefield in Fallujah but a series of factories, chemical warehouses, and military-industrial buildings in the surrounding vicinity were looted, destroyed, or damaged throughout the recent history of the city. In 2005 the UN projected that Iraq was littered with several thousand contaminated sites. By 2010, a Times of London investigation revealed that the US military had generated over four-and-a-half million kilograms of toxic waste and that it was abandoning hazardous material in dump sites along main roads. The problem with determining causal effects with birth defects is the fact that these chemicals all interacted with each other and were also potentially mixed with pollutants left from earlier conflicts. Gottesdiener adds that even amid the nationwide environmental crisis Fallujah’s toxic legacy stood out.

She concludes her article by focusing on Samira Alani’s work and the victims of this crisis: the children of Fallujah and their parents. Alani has dedicated her life to helping families in Fallujah cope with the devastating consequences of war, which according to her are being exacerbated by limited prenatal care and a lack of support for families with birth defects. She has recently written that “the high prevalence of birth defects in Fallujah is impairing the population’s health and [its] capacity to care for the surviving children” – while her photos of Fallujah’s children have become symbols of the irreversible and intergenerational impacts of war…

“The Children of Fallujah: The Medical Mystery at the Heart of the Iraq War” – a most striking article on the complexity of the DU issue | https://www.icbuw.eu/the-children-of-fallujah-the-medical-mystery-at-the-heart-of-the-iraq-war-a-most-striking-article-on-the-complexity-of-the-du-issue/ | 15. Mai 2021