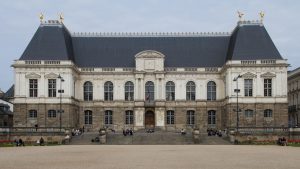 According to reports by Marianne and La Voix du Gendarme, Laurette Friconneau, the widow of the captain of the gendarmerie Henri Friconneau, was able to prove in court that her husband died as a result of the use of depleted uranium (DU) ammunition. In a short video statement published by La Voix du Gendarme on 31.12.2019 on YouTube entitled “The widow of a gendarme who died as a result of exposure to depleted uranium in Kosovo, reported“, she describes her husband’s sudden illness:

“In April 2014, my husband complained about a pain in his leg, I thought it was the sciatic nerve. He went to the doctor who gave him anti-inflammatory medication for a month. Since it did not go away, he was x-rayed and sarcomas were found which had affected his whole body, but it was already too late. They gave him another three to six months. He lasted for a year, but he died under burdensome conditions.“(Translation E.B.)

She also accuses the army and gendarmerie of knowing these rare cases of illness. She demands better answers and support for affected families:

„Although it was not my aim at the beginning, I want people to become aware of the fact that there are persons who have died from cancer they didn’t know about. Also, there are families who are looking for answers and need support.“ (Translation E.B.)

The deceased Henri Friconneau had worked for the French gendarmerie since 1982 as a non-commissioned officer and then as an officer. From 22 February 2000, he was deployed on an overseas mission under the NATO flag for surveillance and investigation with KFOR (Kosovo Force) in former Yugoslavia, based in Mitrovica (now Kosovo), and returned to France on 21 August 2000. The area around Mitrovica was bombed by NATO with uranium ammunition in 1999 – one of the targets was the Serbian army barracks where Friconneau was stationed a few months later. The officer’s illness and death (in 2015) was attributed to this stay.

The process took four years until the court’s decision was finalized – with the help of the lawyer Véronique Rachet-Darfeuille, Mr. Friconneau widow was able to prove that his illness or cause of death (angiosarcoma) was due to his deployment in Kosovo and, in particular, to DU residues on the territory of the barracks, where he lived during this period.

On 21 June 2019, la cour d’appel de Rennes took the decision. The „cour d’appel“ is the court of the second instance. It either confirms or rejects the first-instance judgment and therefore declares it null and void or renders a new judgment from the ground up.  As a result of this judgment, the widow, Laurette Friconneau, was granted a widows‘ pension for surviving dependants, previously denied to her by the Ministry of Defense. Henri Friconneau was awarded the honor of „Mort pour la France“, which is written on the monument of the gendarmes who fell on foreign missions, in the 15th arrondissement of Paris, in the park of André Citroen.

On the causality issue, the court concluded that:

„Since a primary angiosarcoma of the heart is statistically particularly exceptional and represents only 0.00002% of cancers, G X has not received radiotherapy, was not exposed to vinyl chloride during his work and did not have any genetic diseases, it can be assumed, based on the available medical data, that his exposure to uranium located in Kosovo caused the illness and led to his death.’’

ICBUW is carefully following current developments around the case of Mr. Friconneau. The recognition of a causal link between depleted uranium ammunition and health issues and diseases, such as cancer, that affects people in operational areas is of the utmost importance. Such recognition will enable those who have been affected to enforce their claims for damages in court and thus to obtain at least partial justice. With this decision, France is following in the footsteps of NATO country Italy, where the link between diseases and uranium ammunition has been confirmed in court on several occasions (although this is rejected by NATO itself). Numerous studies and scientific papers confirm the dangerous effects of DU munitions on human health and the environment.

The decision of the court in Rennes is an important step towards recognizing the harmfulness of uranium weapons and the resulting claims of their victims.

We hope that the case of Henri Friconneau will become a significant milestone in French jurisprudence on DU.

The Henri Friconneau case – a breakthrough in the (French) DU jurisprudence (?) | https://www.icbuw.eu/the-henri-friconneau-case-a-breakthrough-in-the-french-du-jurisprudence/ | 05. August 2020