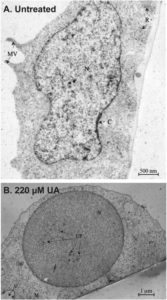 Three recent studies are looking at the different effects of DU on cells, DNA and health in general. The main findings vary depending on the focus of each study and include inter alia a biological phenomenon called “the bystander effect” and the indication that DU induces DNA damage via strand breaks and uranium-DNA adducts in treated cells. While the study linked to the U.S. Department of Veterans‘ Affairs concluded that military veterans show no U-related health effects, one should consider the rather small sample size, scope of study and the focus on only one target organ (kidney).

DU possesses a radiological and chemical component but is generally considered a chemical biohazard. Exposure can occur via wounding, ingestion or inhalation. In vitro investigations have demonstrated that DU is mutagenic, genotoxic, and exposure can induce neoplastic transformation and genomic instability. It is also responsible for cellular damage. In vivo studies have demonstrated carcinogenic, neurotoxic and leukemogenic effects, renal dysfunction, genotoxicity, affects on rodent behaviour, accumulation in the brain and inhibition of vitamin metabolism. DU exposure can also induce chromosomal dicentrics which are considered a radiation-specific chromosomal damage.

There is also a biological phenomenon called ‘the bystander effect’. This effect is defined as the observation of a biological response in cells that are not themselves traversed by ionizing radiation, but which can communicate with cells that are. The effect is a poorly understood phenomenon. The study demonstrates that non-DU exposed cells, the so-called bystander cells, are influenced by their proximity to DU exposed cells and that this phenomenon is not observed with carcinogenic non-radioactive heavy metals. It appears that different cell types respond differently to bystander signalling.

The aim of the study is to characterize the genotoxicity of depleted uranium. Uranium is a heavy metal, that occurs in nearly all rocks and soils. Depleted Uranium (DU) is the byproduct of the isotopic enrichment of uranium for nuclear fuel and weapons.

DU has been shown to produce oxidative stress, DNA strand breaks, chromosome instability, cell transformation, apoptosis, and cell death. Several studies have shown that uranium is not genotoxic at this lower concentration range and activates cellular stress responses rather than cell-mediated death responses. Other studies have proposed that DU may indirectly cause oxidative DNA damage via a Fenton-type redox mechanism or directly generate U-DNA adduct formation via a DNA hydrolysis mechanism cause DNA damage.

The purpose of this specific in vitro study was to characterize the types of DNA damage produced by DU in the form of soluble uranyl acetate (UA) at environmentally relevant concentration ranges. Uranium enters the cell via endocytosis as observed with nickel. The clonogenic assay showed that UA had a significant cytotoxic effect.

As observed in other metals, uranium is considered carcinogenic, mutagenic, and genotoxic by more than one mechanism. The results of the study indicate that DU induces DNA damage via strand breaks and uranium-DNA adducts in treated cells. This suggests that DU is genotoxic in CHO cells and is inducing single strand breaks rather than double strand breaks in vitro.

Gulf War I veterans, wounded in DU incidents and contaminated internally, have been monitored for health changes since 1994. During 2015 an in-patient clinical surveillance protocol was performed on 36 of them.

Exposure to DU can occur via three routes: Either DU fragments are embedded in tissues or particulate aerosols are inhaled and deposited in the lung or (superficial) particulate contamination of the skin can occur.

Urine Uranium (U) concentrations have been used as a marker of systematic exposure to U for the affected cohort since the inception of the surveillance program. Surveillance for kidney effects has been a focus of this health assessment since its inception as the kidney is the known ‘critical’ organ.

But as a conclusion by the U.S. Department of Veterans Affairs, a governmental agency providing medical care for veterans of military service, the military veterans show no U-related health effects in known target organs of U toxicity. The results of an extensive health assessment have also shown no other clinically significant health effects as a function of U burden.

Three most recent studies on the issue of DU | https://www.icbuw.eu/three-most-recent-studies-on-the-issue-of-du/ | 05. März 2019