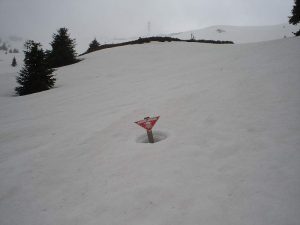 The topic of DU has been addressed more and more in the media in recent years, increasingly in the context of environmental destruction through war, the protection of victims and human rights. At the end of April 2020, the Swiss newspaper WOZ (Die Wochenzeitung) published a material by Marlene Kalt (German), which deals with the Serbian DU case.

The article tells about the impact of DU in southern Serbia, which changed lives of the people living there forever – including Marko Jovic, whose father, an employee of the local waterworks, died of cancer. In the team, consisting of eight men, only one did not die of cancer after working at the destroyed radio tower near Vranje, but even he is still struggling with skin problems that can be attributed to the long-term effects of the DU.

Of course, the work of Dr. Srdan Aleksic and his law firm is also addressed in the article: Until recently, it was unthinkable that anyone would deal with the victims of DU – more than 20 years have passed since the operation and the lawsuits promise neither a lot of money nor are there any fixed prospects of success. In an interview with the WOZ, the lawyer emphasizes that the problem is actually much bigger – it is about „the destruction of the ecosystem“ in the contaminated areas.

In the ongoing cooperation between the Aleksic team and ICBUW, the importance of the human rights complaint procedure for the DU victims in southern Serbia was pointed out (from our side). This path has now been taken and the data have been transmitted to (universal) human rights protection bodies.

However, there are currently factors that have a major impact on the work of Aleksic and his international team, especially the coronavirus crisis. In Serbia, the lockdown was only lifted on May 7th. Due to the rapidly increasing cases of Covid-19 and the security measures of the Serbian government, the symposium planned for the end of March on the DU topic in Belgrade, to which the ICBUW team was invited, was canceled.

In another article by Radio Free Europe / Radio Liberty on December 19, 2019, the different results of studies on DU are discussed. Also in Serbia there are many disagreements on the issue: the spokesman for the parliamentary commission investigating the health consequences of the NATO bombings, Darko Laketic, confirmed in March that children born after 1999 were clearly exposed to the consequences of this bombing. However, there are reports from other MPs that the details of this study were never made public. The chairman of the ethics committee of the Serbian Medical Association, Zoran Radovanovic, also denied the rise in cancer cases in the bombed areas in 2018 – NATO took a similar position as well.

A cooperation agreement between institutes of oncology in Russia and Serbia was recently signed. However, it includes no reference to the investigation of the consequences of the bombings in 1999, although this was discussed by the Russian ambassador. The Institute of Oncology in Belgrade has confirmed that the cooperation agreement does not propose for such studies.

Beyond the DU issue, there is other human rights news as well. At the end of April 2020, the annual report of the ECCHR (European Center for Constitutional and Human Rights) was published – a very important, efficient human rights protection institution with which ICBUW has been cooperating for a long time. The annual report addresses many important topics, including the impunity of the “powerful” in international law – the states in question are usually influential enough to escape responsibility. Such a situation can also be observed in the Serbian case. Finally, the program on Planet Wissen Channel with Wolfgang Kaleck, the General Secretary of ECCHR, is highly recommended for watching (German).