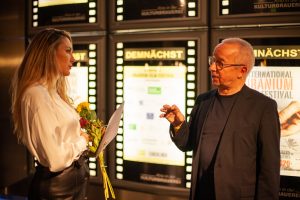 The Berlin event marked the tenth anniversary of the International Uranium Film Festival (IUFF). The fact that it took place at all in the times of Corona and that there was such a great response from the public, as well as high-quality content was a huge success that one could not have expected. ICBUW was there from the beginning as we were „promoted“ to be co-organizer this year and were even more involved than before, also in the form of the ICBUW team (Eliah Buchholz, Ilia Kukin, Arina Shpanova).

ICBUW spokesman Prof. Manfred Mohr opened – alongside IUFF producer Jutta Wunderlich – the Berlin festival and proceeded to the opening film “Vom Sinn des Ganzen” (English: „Of the sense of the whole“), which had its world premiere at the festival. This was followed by a conversation about the film, which focused on the researcher Hans-Peter Dürr. Among other things, there was a question of whether our new, younger generation is ready to replace the older one (the one of e.g. Biegert and Mohr) in peace and disarmament matters. The answer was affirmative…

There was another moderation from the side of ICBUW for the film „The Beginning of the End of Nuclear Weapons“. An intensive conversation developed with the present producer Tony Robinson, ICAN, and IPPNW representatives. Among other things, it concerned whether there is – in addition to or in connection with the Nuclear Weapons Prohibition Treaty – an international law ban on the use or threat of use of nuclear weapons. This could be derived from customary international law, as expressed in the 1996 International Court of Justice opinion on nuclear weapons.

As expected, a highlight of the festival was the performance and discussion of the film “Balentes”, which was awarded as the best documentary film. It led to an exciting, stimulating panel discussion with the director Lisa Camillo and the Sardinian ICBUW friend Pitzente Bianco. The central issue was whether and in what way the specific, culturally and traditionally shaped commitment of the Sardinian population to the protection of the island’s homeland must be strengthened through external structures and networking. ICBUW spokesman Mohr pointed out the potential of UN human rights complaints procedures for protecting depleted uranium and environmental victims.

The end phase of the festival, which the ICBUW special event on October 18 in Marienstrasse 19/20 belonged to, was marked by the award-winning film “Valley of the Gods” by Lech Majewski. In his short closing speech as well as in his festival greeting, the ICBUW spokesman expressed the hope that the IUFF will continue: „… It is essential in its bringing together of the public, artists and civil society actors concerning existing, unsolved humanity issues. We’ll stick with it in any case.“