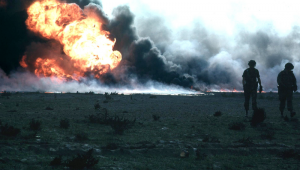 On 6 November 2019, 103 NGOs and experts from around the world (including ICBUW) honoured the United Nations’ International Day for the Exploitation of the Environment in War and Armed Conflict by signing a joint civil society statement urging the international community to act on the synergies between environment, peace, and security.

In public international law, the link between war and environmental degradation has long been recognised. Article 35 of Additional Protocol I to the Geneva Convention as well as the Convention on the Prohibition of Military or Any Other Hostile Use of Environmental Modification Techniques prohibit the use of ‘methods or means of warfare which are intended, or may be expected to cause, widespread, long-term and severe damage to the natural environment’. Nevertheless, the high threshold contained in the legal provisions coupled with weak enforcement mechanisms leads to a widespread lack of compliance. In a conversation with German public television station ZDF, ICBUW speaker Manfred Mohr points out that the development of stricter rules regarding the protection of the environment in armed conflict seems unrealistic as long as existing provisions remain unenforced. The case of depleted uranium illustrates this: despite its toxic and cancerous properties, applicable standards such as the precautionary principle have not (yet) been adhered to, although public pressure has effectively brought the further development of weapons containing the heavy metal to halt. Given this success, it is clear that civil society has an important role to play in enhancing environmental protection during conflict.

In their joint statement, the signatories stress the devastating effects of conflict on ecosystems and point out that environmental degradation itself poses a risk to international peace and security, thus triggering a downward spiral in which both phenomena are mutually reinforcing.  They further emphasise that the visibility of environmental damage and our understanding of its causes is being enhanced through technological progress, which has worked as a catalyst for policy-making in this regard. While many initiatives on the environmental dimensions of conflict have consequently emerged, action on the ground, unfortunately, leaves much to be desired.

The signatories, therefore, call on the international community to:

The urgency of these demands is illustrated by a series of incidents in ongoing conflicts that have caused immense harm to people and the environment. The deliberate burning of crops in the Middle East and attacks on water and oil infrastructure in Libya, Iraq, Saudi Arabia, Yemen, and Syria are two of the examples highlighted in the statement.

The United Nations’ decision to dedicate a World Day to environment and conflict and the solidarity expressed through this joint civil society statement unambiguously demonstrate the exigency of the situation: the international community must act now to secure progress on the environmental dimensions of peace and security.