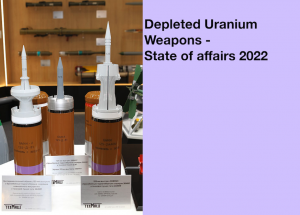 In light of the Russian invasion of Ukraine there is a question arising – does Russia use uranium ammunition there? Does Ukraine have such weapons? And overall, what countries have depleted uranium weapons in their arsenals? There are not many cases of use of depleted uranium (DU) weapons, that were widely discussed in public, the most prominent being Iraq War and the Operation Allied Force in the former Yugoslavia. Since then there were several reports of DU use, some of which (e.g. by the US in Syria against ISIS targets) have been officially confirmed and some being claims with little to no evidence (e.g. DU use by the Russian backed forces in Ukraine in 2014). However, none of them got as much attention as former Yugoslavia or Iraq. This fact reminds us, that apart from aiming at the prohibition of the production, stockpiling and use of depleted uranium weapons, the victims of these weapons should not be forgotten. A victim-based approach is of immense importance, as the people in contaminated areas are often left out of the issue without access to an effective remedy in form of judicial procedure, as well as without access to healthcare facilities.

The answer to both above mentioned questions is complicated, as a significant amount of the information regarding DU weapons is classified. However, for certain states there is reliable information on the matter.

Russia has a significant number of different DU-rounds in its arsenals. There are reports of mass production of the improved Svinets-1 and Svintes-2 depleted uranium ammunition, for which the T-80BVM tanks were modernized during the last years. It seems that Russia didn’t abandon its DU programme, but on the contrary – it has increased production volumes and is actively modernizing outdated tanks to make them capable of firing DU ammunition. Even though there are no reliable reports yet, considering the DU-capable tanks being used in the invasion, ICBUW fears use of DU in Ukraine.

It should be also not be forgotten that the production of depleted uranium weapons is closely tied to the nuclear cycle. Massive amounts of depleted uranium waste, which were imported to Russia within the last years, are a worrying sign, however, the military use of the imported DU is rather unlikely: Russia has its own domestic DU-production, which is more than ample for the weapons production.

Ukraine, on the other side, had DU-rounds during the Soviet times. According to the statements of military officials, most of the rounds were moved to the Russian SFSR even before the collapse of the Soviet Union. As for 2001, the remaining ammunitions were not in service, as they were considered outdated (rounds were produced in the 60s) with plans for disposal. Despite multiple claims about the US, France, or other NATO countries shipping (or having shipped) DU-weapons to Ukraine for defence purposes, there are no reliable sources to confirm this information. ICBUW has investigated several such claims and did not find any substantial evidence – e.g. FGM-148 Javelin Missiles use a HEAT-type warhead, which, unlike kinetic energy penetrators, do not need depleted uranium components. MILAN anti-tank guided missile system also does not use depleted uranium, even though it uses another questionable component – thorium. We will continue to monitor the situation and to investigate such claims in the future.

The US played a leading role in the production of DU ammunition in the past. In December 2021, US Army Contracting Command has awarded General Dynamic a contract for demilitarization and disposal of depleted uranium. Completion date is set for the November 20, 2026. Disposal is planned for the depleted uranium armour, which was protecting several American tank models, as well as armour-piercing projectiles, used in munitions such as that fired by the A-10 GAU-8 Avenger 30mm gating gun. Earlier this year, US arms maker Northrop Grumman also confirmed that it is ceasing depleted uranium weapons production.

The UK still has two projectiles with depleted uranium in service – CHARM 1 and CHARM 3, both developed for the Royal Ordnance L30 120mm rifled tank gun. CHARM 1 was developed in the early 90s, CHARM 3 entered service in 1999. The gun and ammo in question are being carried by Challenger 2 MBTs, which are now undergoing a modernization programme. Modernized tanks will be named “Challenger 3” and one of the most significant improvements is the new turret, which will be equipped with the latest Rheinmetall 120mm L55A1 smoothbore gun. Previously relying on the ammunition with a depleted uranium penetrator, it is unlikely that the tanks will be equipped with it in the future, as Rheinmetall does not make APFSDS rounds with DU penetrators and there are no plans on developing and producing such in the future. The new L55A1 gun is optimized for German-made ammunition, allowing the UK to use NATO standard ammo (DM33, DM43, DM53 and DM63) with no depleted uranium penetrators.

However, it must be assumed that CHARM 1 and CHARM 3 still are in service, as the first Challenger 3 tanks are planned to enter into service with the British army by 2030.

India is using T-90S Bhishma and T-72 Ajeya tanks, which are modifications of Russian T-90 and T-72 tanks. Both of them are capable of shooting 3BM-46 Svinets rounds, which have depleted uranium penetrators. There have been reports of India developing its own depleted uranium rounds, however, there is no reliable information publicly available.

Pakistan also has reportedly developed his own DU anti-tank rounds for 105mm guns, as well as Naiza 125mm anti-tank round with depleted uranium penetrator for the Al-Zarrar and T-80UD tanks in service with the Pakistan Army. Even though the production amounts are classified, the rounds are produced by the National Development Complex and believed to be in service since early to mid 2000s. There are no reports of these ammunitions being decommissioned, last reports confirming them being in service date back to 2016. It must be assumed that they are still being used, as the tanks capable of shooting them are still considered modern in the Pakistan Army.

French Parliament has confirmed the depleted uranium ammunition (for the Leclerc tanks) being in service in 2013. The ammunition type in question is OFL 120 F2 APFSDS-T round. There were development reports of a new PROCIPAC APFSDS-T round with DU penetrator (also for the Leclerc), however, it is unclear whether it was completed and it is not clear which name was given to the round, as “PROCIPAC” was the codename in the development phase. AMX-30 tanks were equipped with OFL 105F2 APFSDS-T rounds, containing depleted uranium, but French Army retired its AMX-30 series tanks in 2011, leaving Leclerc as the only DU-capable French tank.

There are several states that did not develop their own DU rounds and relied (or are still relying) on imported DU-ammunition produced abroad. This list should not be considered exhaustive, as not all countries disclose weapons deals.

The fact that the US (with its largest in the world DU stock) is planning demilitarization and disposal of its DU ammunition, is, without doubt, a very important step in the right direction. However, it is unclear what impact this decision will have on other countries which have DU rounds in service. It is likely that this shift in the US military politics will (at least for now) not move other countries towards making the same decision. Russia, for example, has recently modernized its T-80 tanks to become DU-capable (despite condemning US’ actions in Yugoslavia), China and Pakistan developed their own depleted uranium ammunition and seem to have no plans for disposal.

One more problem is the missing transparency in the militaries around the world – most of the information on whether certain weapons are in service is classified, as are the development and production. It is possible, that other states, not mentioned in this report have soviet-made depleted uranium ammunition (especially former Soviet republics) or have bought ammunition from the US, China, or other countries. Depleted uranium weapons are still a big problem, and they are, unfortunately, here to stay at least for the coming years, if not decades.

ICBUW reminds that the use of DU – due to its radio-active and chemical-toxic properties – creates a long-term health threat for civilians and the military alike, obstructs reconstruction through ravaged areas, spreads fear and is difficult and costly to remove. The properties of DU weapons make it impossible to completely decontaminate contaminated sites where they were fired.

As for now, we continue to monitor the situation and to coordinate campaigning against DU ammunition worldwide. With the upcoming UN General Assembly resolution on depleted uranium weapons prohibition scheduled for 2022 we hope to see another step towards the complete DU-ban.

We also invite everyone with relevant knowledge, news, or any other information to contribute to this overview.