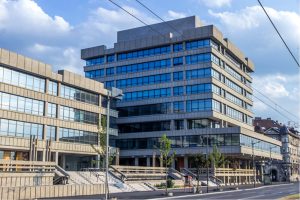 For years the Serbian lawyer Dr. Srđan Aleksić – supported by an international team of lawyers, journalists and scientists – is fighting for the victims of the NATO bombing of ex-Yugoslavia with DU ammunition. ICBUW closely follows the developments and is in contact and intensive exchange with the Aleksic team. A few weeks ago (20.1.21) his law firm filed a lawsuit against NATO in the Higher Court in Belgrade on behalf of Serbian citizens who have contracted cancer after the DU bombing.

The Aleksic team is claiming compensation for damage to the health of soldiers, police officers and reservists who were in areas where DU ammunition was used during the NATO mission – especially in southern Serbia and Kosovo.

An important point of reference in this complaint is the decision of the District Court in Belgrade in 2001, in which the criminal liability of NATO commanders and leading representatives of NATO member states was established. Although the verdict was overturned, the defendants were not acquitted – thus the case is still not closed in the Serbian legal system; the limitation period has not expired and a war crime against civilians has been established. The Sdran Aleksic team would like to build on this process in the new court proceedings. Political immunity does not stand in the way as it is a war crime case – said Aleksic. NATO is viewed by his team as an international organization with its own legal personality and its own budget, from which the compensation is to be paid – NATO’s willingness to pay, however, is unlikely to exist. But the lawyer from Nis is not only interested in compensation for his clients – the lawsuit should also constitute an offer of mediation to NATO, which is linked to the Republic of Serbia by the Partnership for Peace Agreement of 2006…

There were considerations to initiate the proceedings in courts in NATO countries, but the Aleksic team decided against it. According to the lawyer, the courts would declare themselves incompetent. This could be seen in the unsuccessful complaints from relatives of journalists who perished in the 1999 NATO air strikes. Allegedly, neither a court in Italy nor the ECHR (European Court of Human Rights) in Strasbourg had jurisdiction – on the grounds that they were not Italian citizens. A similar lawsuit in Germany in the case of the cluster munitions victim Milica Rakić failed for the same reason.

Given the high cost, the team did not find it sensible to seek justice in courts outside Serbia, especially when the prospect of success is so slim. However, the costs of initiating and conducting proceedings are also high in Serbia, and the intention is to set up a fund to finance court costs.

According to Sran Aleksić, the chances of success in a court in the Serbian capital are high: “We are sure that we will win this trial. Citizens of the Republic of Serbia who have cancer are in the same legal position as soldiers of the Italian army who contracted cancer after their stay in Kosovo and Metohija due to the harmful effects of the use of DU ammunition.“ A corresponding causal link had been established before Italian courts and damages were awarded.

The Aleksic team continues to try to attract media attention: in Serbia, numerous magazines reported on the trial – including one of the largest opposition newspapers Danas and Juzne Vesti from Nis. The German-language newspaper of the ex-Yugoslav community in Austria „KOSMO“ also published an interview with Aleksic in  which he reports on the background to the lawsuit. For Aleksic, media attention is also a means of bringing experts from the office of the UN High Commissioner for Human Rights (OHCHR) to Serbia: on the advice of ICBUW, his team contacted the corresponding (almost cost-neutral) human rights complaint system; complaints and documents are now sent to Geneva. Unfortunately, there has been no response to the request to investigate the case independently.

If the current lawsuit is successful, the decision of the court in Belgrade will be an important milestone in Serbian case law and DU case law in general – not only for DU victims in Serbia, but worldwide. ICBUW continues to follow the events in Nis and Belgrade and hopes for the success of Srdan Aleksic and his team in court; further lawsuits in Serbian courts, also on behalf of civilians, are planned. In any case, exchanges of work and consultations will continue…